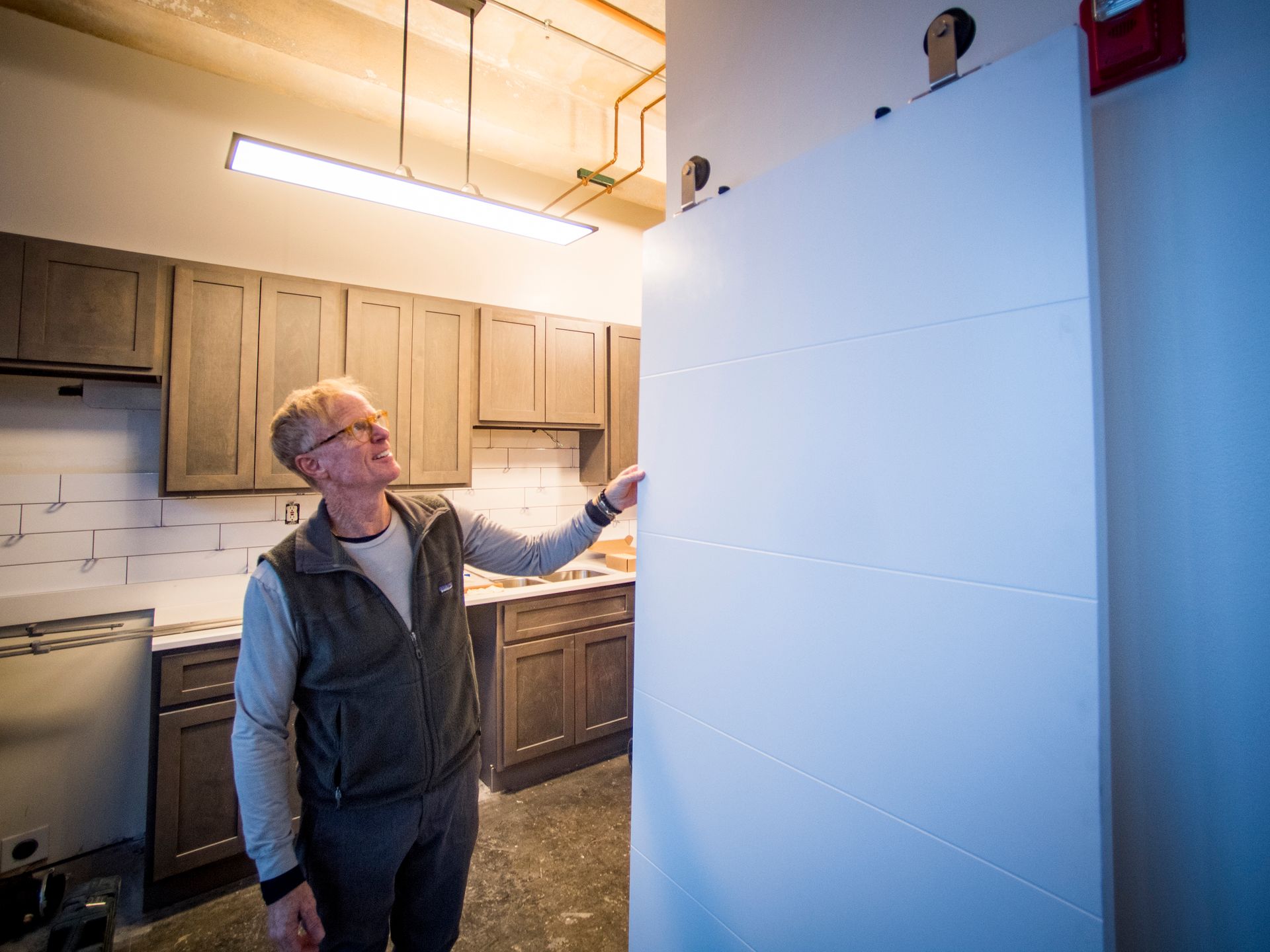 Knox News: Gay Street condos to have parking, rooftop lounge and more — but the current occupants must go

Leigh Burch III, the majority owner and managing partner of Sterchi Lofts, remembers visiting Knoxville from Atlanta 20 years ago and driving through downtown on game days. It was nothing like it looks today.

“You could buy any building you wanted,” he said. “It was dead, and (Sterchi) was the biggest building available at the time.”

He developed Sterchi and first rented the apartments in 2002 to the “students and trailblazing people” looking to move downtown. Now, that demographic has expanded.

Sterchi is in the process of transforming the lofts, located at 116 S. Gay St., into condos by renovating each unit, updating the fitness center and adding a rooftop lounge and resident parking to the list of amenities.

Sterchi Lofts in Downtown Knoxville to convert from apartments to condos 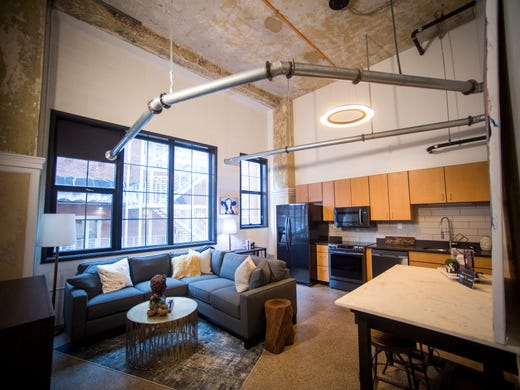 Sterchi Lofts in Downtown Knoxville to convert from apartments to condos

“Over time, as the markets have matured and people have embraced the lifestyle, you have an older demographic (looking to move downtown),” Burch said. “For us to spend all that money to redo the units, we’d have to either refinance the building or condo the building. To me, the time is right to condo for these reasons — the price point, the size of the units and the amenity package.”

But first, the existing residents must move out.

The Sterchi building was constructed in the 1920s and has undergone multiple renovations. Burch now plans on renovating the 100 apartments at Sterchi Lofts unit by unit. 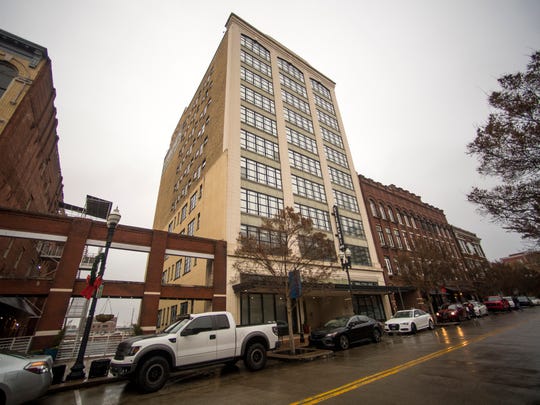 The Sterchi building was constructed in the 1920s and has undergone multiple renovations. (Photo: Brianna Paciorka/News Sentinel )

Burch said he will not cancel tenants’ leases. With people still living there, he is simply waiting until the leases run out — no exceptions from either party.

Hashu Watson moved into Sterchi Lofts in August. Over the past few weeks, she said, multiple residents have seemed confused about their status as tenants.

In a letter dated Oct. 24, Burch notified residents of the conversion plans. Sterchi held a Q&A one week later to address any concerns.

Watson received the letter and began looking for a new place to live. She thought she found the perfect spot but was told by Sterchi’s management that she could not leave early.

“I was hoping to find a new place,” she said. “I’ve talked to people who have lived here for years who are really upset about this. This is just home for them, and it’s a conveniently located spot, and downtown is getting increasingly expensive.”

Burch expects only about three of his renters to purchase a condo in the building.

There’s a chance that some leases may be renewed depending on multiple factors, including when leases expire and the interest in individual units.

Sterchi is Burch’s third condo development and, unlike others, there is no rush to move renters out or move buyers in. 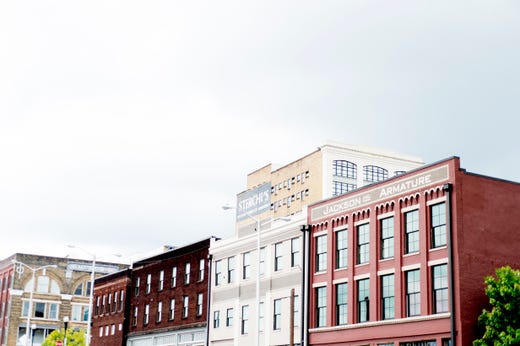 “The building has always remained fully leased,” he said. “We have an existing rental base that can service the debt. That gives us a lot of freedom to take our time and do the renovations properly. … It could take two years, but it’s fine because we’ve always stayed fully leased.”

The renovations will average about $30,000 per unit, he said, and include quartz counter tops, modern lighting, new stainless steel in the kitchen and new bathroom tile.

The system previously installed was “terribly inefficient,” he said, making residents unable to keep their units cool in the summer and leaving them with high utility bills. 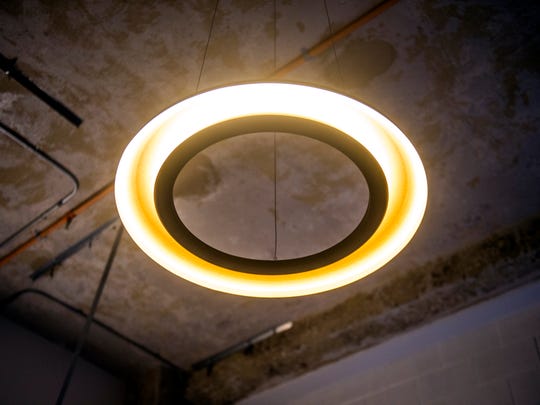 New light fixtures are being added to the units at Sterchi Lofts. (Photo: Brianna Paciorka/News Sentinel )

The former rooftop area also didn’t work well, Burch said. People used it for doing, what he would only describe as, things that “shouldn’t have been going on.”

But that soon will change, as the rooftop lounge is among the three amenities that no other downtown condos or apartments offer together, he said.

Burch said he cannot explain how he will offer parking to buyers, as that information is “highly confidential” until early 2019. He has been working on the parking situation for more than a year, he said.

The parking, combined with the fitness center and rooftop lounge, will put Sterchi at a “huge competitive advantage,” Burch said. 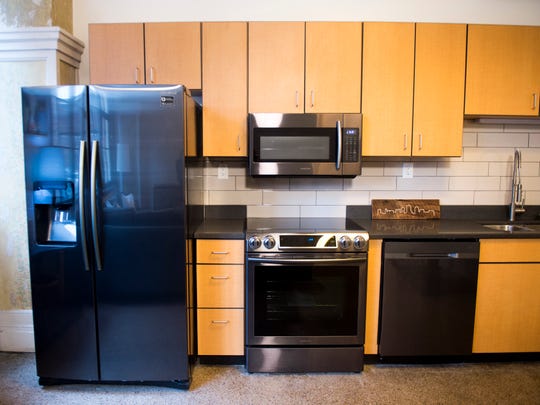 The renovations at Sterchi Lofts will average about $30,000 per unit and include quartz counter tops, modern lighting, new stainless steel in the kitchen and new bathroom tile. (Photo: Brianna Paciorka/News Sentinel )

A fitness center already exists in the building, but he plans on updating it with new equipment. The rooftop, which closed 10 years ago, also will undergo major renovations.

Burch bounced around the idea of a rooftop bar but later decided to make it more personal and exclusive.

He plans on having a four-pod minimum of high-end furniture on the rooftop, with commercial-grade railing comparable to that at the Hyatt Place Knoxville. 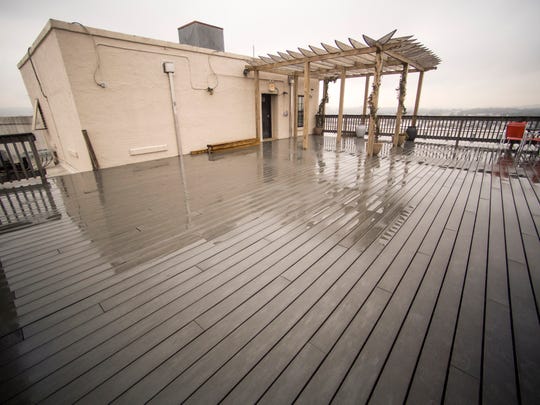 The rooftop deck will be renovated and reopened at Sterchi Lofts on Gay Street in downtown Knoxville. (Photo: Brianna Paciorka/News Sentinel )

“The rooftop bars are so much fun,” he said. “But the people who live in the building are going to be able to take a bottle of wine on the roof, sit down with their friends, have a cocktail and not have to pay for it.”

Residents will still pay for the convenience of the deck when they buy the condo, and the cost to buy is more than Sterchi’s current rent rates — between $1,000 and $2,400 per month, depending on the size.

However, the condo prices at Sterchi are lower than most options in downtown Knoxville, Burch said.

Burch said Sterchi has 21 reservation agreements with interested buyers. The plan was to get these 21 agreements in three months. It happened in just 30 days, he said. 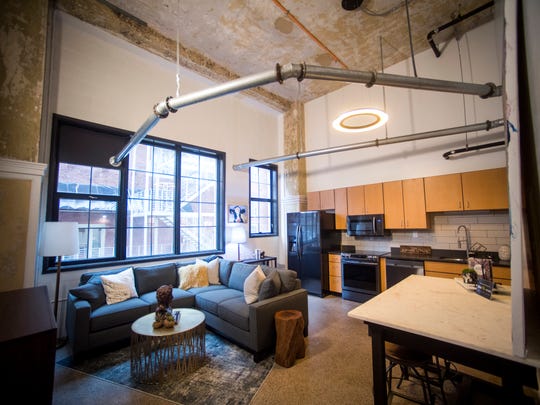 The living room and kitchen area in a condo being renovated at Sterchi Lofts on Gay Street in downtown Knoxville. New light fixtures and kitchen appliances are being put in the renovated condos. (Photo: Brianna Paciorka/News Sentinel )

“Our goal was to just meet our financing criteria — what we needed to do to get the loan closed,” he said. “I would think the first closing would be no later than February. There’s people already ready to close and move in.”

A pricing sheet for the first seven of 12 floors was provided by Burch. Prices on the sheet range from around $185,000 for a one-bedroom unit to around $600,000 for a “huge” four-bedroom unit with two bathrooms. The units range in size from roughly 600 square feet to 2,100 square feet.

“It’s a really diverse floor plan,” Burch said. “What’s going on there is that our floor plans are very efficient and our units are smaller. If somebody is looking for a two-bedroom, they can now pay $280,000 instead of $430,000 (elsewhere).”

Developer Leigh Burch III shows some of the sliding doors that will be installed in the renovated condos at Sterchi Lofts on Gay Street in downtown Knoxville on Thursday, Nov. 29, 2018. (Photo: Brianna Paciorka/News Sentinel )

Burch believes this will give him an advantage and will allow more people with financial barriers to move downtown. And why would people want to move into the heart of the city?

“It’s the same reasons it was 20 years ago, but more people get it now,” he said. “The reason people wanted to move down here a long time ago is they wanted to be able to walk to bars and restaurants and the theaters. But what’s evolved in the last 20 years is there’s been a more profound development of all those amenities downtown.”

Sterchi Lofts is in the 100 block of Gay Street, which makes it a walkable distance from Gay Street businesses, the Old City and Market Square.

Those looking to learn more about reserving a unit can call Terminus Real Estate at 865-673-6300. One model unit has been completed, and another is being renovated.