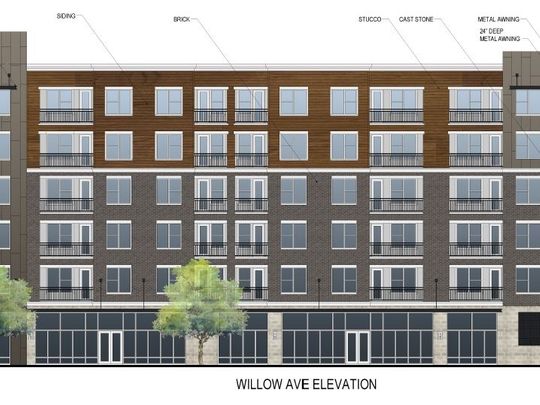 Knoxville’s developing downtown soon will offer one more place to live and play.

The six-story, 152-room apartment building, named Stockyard Lofts, will offer a place to live right near downtown and have 5,000 square feet of retail space and 185 parking spots. The group would like to break ground on the $28 million project at 215 Willow Ave. early next year.

“I think it’s going to be real close to the amenities downtown … a block away from Gay Street and several blocks away from Market Square … it’s a real high-visibility location,” said Leigh Burch, owner of Terminus Real Estate.

Daniel Smith of Legacy Capital, a partner in the project, said the project should be great for the Old City.

“This property is perfectly situated to help support growth in the Old City, but it will also be an important catalyst for development in adjoining neighborhoods, especially on the east side of the James White Parkway,” Smith said in a news release.

The complex’s name comes from the type of businesses that once filled the area. The stockyards used the easily accessible railroad lines that litter the Old City and the Tennessee River to the south.

The group doesn’t yet have a suitor for the 5,000 square feet of retail space but it’s coming, Burch said.

Knoxville’s downtown coordinator Rick Emmett said the project will be transformative for the Old City.

“Adding a number of new residents will make the Old City have much more vibrancy at all times, not just in the evening as it has been for a number of years. Anytime we can add more opportunity for retail establishments anywhere in the Downtown area is very positive as well,” Emmett said in an emailed statement.

Knoxville Mayor Madeline Rogero has made it a priority of her administration to continue to seek affordable housing options in the city. She budgeted $2 million in the 2017-18 budget to help stem the worsening shortage of affordable housing across the city, a large step in her fight against what she warned could become a “crisis situation.”

With that in mind, Burch said Stockyard Lofts would set aside 10 units to be used for workforce housing. Those units would have discounted rents of about 40 percent, roughly $740 a month.

“We know there’s a real shortage for that downtown,” he said. “It’s real hard to find a place for police offices and teachers and firefighters and bartenders and we wanted to work with the mayor and their office. It’s something they would like to see and something we’d like to see.”

Regular rent prices go as high as $2,050 a month for a large, two-bedroom suite, Burch said. There are eight different floor plans in the project.

In order to make the project work, the group will seek financial assistance from the city in the form of a payment in lieu of taxes (PILOT) agreement.

When asked if Knoxville’s downtown area had become saturated with apartments with people flocking towards the densely populated area, Burch said there’s still room to grow.

“It has so many good things going for it,” he said. “I think the whole urban thing is hard to beat, so I think people will continue to make the decision to pay a little extra and move and live downtown than being in the suburbs and being in the automobile sprawl.”

The announcement comes months after Knoxville Developer Rick Dover’s proposed a similar mixed-use plan for the former Supreme Court site downtown. The Knoxville City Council approved a resolution in May that allows Dover and the city to enter into a purchase-and-sale agreement. Council will still have to approve the financial package before any deal is reached.

That property would have a 170-room upscale hotel run by Aloft Hotel, 230 apartment units, a PetSafe store complete with a pet daycare, a Burleson brand restaurant inside the former Supreme Court chambers, 8,000 square feet of meeting space open to the public and 490 parking spaces.